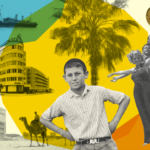 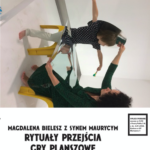 The beginning, casual – a sketch, an image of a thought – a record. An academic foundation and a tool of anarchist artistic expression. Drawing, in its many forms, is the topic of “Dibujo”, the latest group exhibition of the Wall Gallery.

Magdalena Bielesz is an artist who mainly concerns herself with painting. But she also creates video art, and sometimes uses crayons, markers, or even modelling clay. In her art, Bielesz overcomes her own fears and limitations. Insightfully and consistently she studies two areas — womanhood and childhood. She looks for their common features and differences between the two, which she expresses in a formally characteristic style, adding a metaphoric dimension to her art.

Gosia Bartosik is an artist from the generation of beginners in their thirties. She paints and draws, and treats both disciplines equally. So far, she created several series of drawings, including “Red Drawings”, “Intymnik” and “Psia Mać”. Gosia likes to explore “in between” spaces: between what is true and imagined, human and animal, male and female. She presents serious subjects in a sometimes brutal manner, but never devoid of humour.

Kornelia Dzikowska works mainly with forms in space; she creates objects and installations with great attention to their visual side. The artist is driven by the constant need to command matter. What has become her greatest challenge are elements which she often features in her work. Recently, Kornelia has been trying to master time, which results in her latest series of digital drawings, “Notes from the passing time.”

Małgorzata Gurowska is a visual artist, lecturer, and curator. Graphic design, video art, installations, sculpture, and drawing form the backbone of her artistic practice. Her work “Clean hands” featured in the exhibition is a series of pencil drawings on parchment paper. The scale of portrayals refers to the human head, while forms themselves—although drawn from actual shapes—become abstract and thus evoke multiple associations. The synthesis of thought and form is the best way to describe Gurowska’s activities which allude to the perspective of new materialism and post-humanism.

Katarzyna Szumska works in painting, stage design, photography and video art. Since 1992, she has been a co-creator of Cinema Theatre, an avant-garde group active at the intersection of visual arts and the theatre of movement. Szumska is interested the most in the portrait – both “alive” and “dead”. Putting a filter on the image makes every subject matter, even if whispered, resound with screaming. The “Dibujo” exhibition will feature watercolours from the artist’s drawer that will reveal her previously unknown interests.

The piece which completes the exhibition is a work by Konrad Smoleński “Drawing”, video, 3’30”, 2001.

Konrad Smoleński (b. 1977) active in the area of visual arts, working with sound, video and performance. His works operate frequently between the potential inherent in the energy charge and the physical limitations of the surroundings. Lives and works in Warsaw (PL) and Bern (CH).