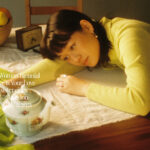 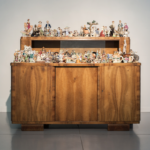 We have the pleasure to invite you to the finissage of Monika Mamzeta’s solo show „… I Love You Too” co-organized by Wall Gallery. Curatorial tour is planned for Sep 25, 2021 at 6:30 pm, TRAFOSTACJA SZTUKI in Szczecin. See you there!

You might find it peculiar when you hear a request made of your colleague to cast the corpse of somebody’s grandfather before the burial. A woman’s wish to create a cast of her torso before breast removal procedure may come as a surprise. There is, however, a kind of sentiment caused by the nostalgia for the moment before the change. The relics created in the above process help to accept the feeling.

The exhibition … I Love You Too by Monika Mamzeta summarizes 25 years of her work. As the artist admits, she creates art when there is a problem, frequently one with a political background. Things, however, get most serious when she is forced to face change.

Monika Zielińska, known as “Mamzeta”, graduated from the sculpture atelier of prof. Grzegorz Kowalski, in the period of the so-called “Kowalnia”. A professional lawyer, she is a qualified advocate and patent attorney. She received her diploma from the Academy of Fine Arts in Warsaw in 1996 (thesis: “Androgyne / gyneandros”). … I Love You Too begins at this point, although it is not a chronological project.

The exhibition tells the story of relationships. Emotions and crises. Experiencing illness and divorce, the space between the cesarean scar and the navel. It is a multi-generational story told from several perspectives, against the background of faith – also in its liturgical dimension; love that can outlast anything, and hope that dies last. Mamzeta’s works combine various motifs into artistic oxymorons. The most common collision point is childhood.

In her work from 2003, Mamzeta declares “when she grows up, she will be a virgin.” Seven years on, she faces a particular type of adulthood when she is going through a disease. First, her mother fell ill, which inspired the artist to create the work plus/minus. A few years later, the motif has come back to Monika as one of tattoo designs proposed in the competition Itsy-bitsy CANCER… leaves you with a SCAR, announced in autumn 2020. Exactly 5 years after Monika’s surgery.

The assumptions were simple. Mamzeta and the Wall Gallery announced an international competition for a tattoo design that would be created in place of the artist’s removed breast(s). The competition jury had been appointed to select the winning design from more than 50 submitted works. The author of the famous Mother’s Scar had one of them made in February 2021. “Marker was replaced with ink” in a meaningful way, ending the earlier stage of the body doodles. The exhibition at TRAFO presents the individual phases of the project and premieres  Mamzeta’s recent work.

… I Love You Too consists of four parts spread across all floors of the TRAFO building as well as the space between the levels. Play and toys, games and symbols. Including linguistic and visual ones. Acting in a perverse, delusive and conventional way. Everything shown in a form characteristic of the artist. In the raw.