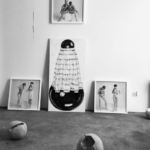 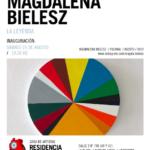 Resonance, the title of Joanna Borkowska’s solo exhibition opening on August 28, refers to a new series of paintings the artist has created in New York during the past year. Borkowska’s artistic practice vacillates between painting, alchemy, and forms of meditation. Her unique philosophical approach to painting is inspired by nature, which she understands as everything that exists, from the molecular to the cosmic, with all its forces and processes. She has been exploring the “resonance theory of consciousness,” which describes how the vibrating frequencies of discrete entities experience moments of synchronization when they come in contact with each other. Through precision of color, consistency, atmosphere, and flow, Borkowska acts as a mediating force that transfers and translates the invisible onto the canvas. The result is a mysterious effect: monochromatic planes that reveal, upon closer look, intricate patterns with luminescent depths that interact with light and the movement of the viewer.