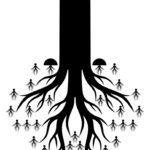 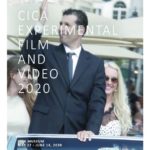 Setting to work for the Project Room, Kornelia Dzikowska decides against staging an exhibition. Instead, she creates a site-specific installation, all elements of which comprise a single work. Despite claiming the whole space, it is extremely ephemeral and will leave no trace in the form of an art work. It is like a blinking warning light, turning on and off. At the very centre of this experience is the colour red filling the space – alarming, garish, dominant, and attention-riveting. Often used as a symbol of life, blood, the heart, warmth, or intimacy. Dzikowska turns the Project Room into the interior of a trembling organism, as if she wanted to get under the skin of the institution.

She thus brings forth an aesthetic situation woven with seemingly delicate tensions. Writing a red room into the white cube, she juxtaposes two parallel worlds. Separated by a wind-blown fabric, they function in a close interrelation. When the fabric swells, one annexes an ever larger space, while the other’s territory diminishes. This escalation can, however, progress only up to a point as a rip appears in the middle of the fabric, signalling what is on the other side.

Dzikowska uses the Project Room space to raise the issue of power, the domination of one group, person, or emotion over another. A fascination with the ability to generate tensions and watch the public’s reaction is also evident in her earlier works – in a striving to control time or one of the elements and to overcome one’s own limits. In the present work, Dzikowska confronts the issue of power directly – evincing a trial of strength, relativity, and temporariness. She focuses on a liminal moment, where the outcome of a situation hasn’t been decided yet and the roles can be reversed at any time.

The artist invites the visitor to step out of the role of spectator and become a participant instead; she doesn’t, however, provide any clues as to the rules applying in the new situation. Creating an installation around opposites, she avoids the question of whether either of the represented worlds offers a guarantee of security. Speaking of co-opting the unknown, she faces uncertainty towards change.